Edito NL42: The winter cereal crop year ended on a worrying note: while the multifactorial crisis caused already high prices (energy, food, agricultural inputs) to soar - some prices have since fallen back - the 2022 harvest in several Mediterranean countries was poor. MED-Amin had anticipated this in its Forecast Bulletins throughout the second half of the 2021-2022 season. Fearing a possible global food security crisis, farmers struggled to save their crops from extreme weather events this year.
As much of Europe "baked" under the latest heat wave, there are growing fears of what some experts call "heatflation" - food inflation due to drought-induced crop losses. Indeed, the lack of rainfall in the spring, combined with drought and severe storms, has spoiled harvests in Italy, France and Spain. As summarised in the latest European estimates, this year's cereal crop yields will be well below normal in Europe (especially in maize).
This is also the case in Portugal, and in Morocco, which is experiencing a historic drought. This reduced supply in 2022 compared with the five-year average in these countries will put additional pressure on domestic markets that are already under pressure, leaving operators in the sector, decision-makers and consumers with difficult choices. This was the observation made by Mr Mohammed Sadiki, Chairman of the CIHEAM Board of Directors, at the 150th meeting of this Board in Chania, Greece, on 18 and 19 July 2022. The participants recalled the difficulties encountered by the agricultural sectors and the most fragile populations of the Mediterranean in coping with this succession of crises (Covid-19, Russian-Ukrainian war, serious droughts, etc.). Facing these threats to food and nutritional security and living conditions in this region (whose structural weaknesses had already been identified during the 2007-2008 crisis) calls for greater food sovereignty of countries, Mediterranean solidarity and the strengthening of cooperation for more sustainable, inclusive and shock-resistant food systems. Alongside courageous political decisions and ambitious new multisectoral strategies, there is no doubt that tools such as the information systems developed over the past few years, such as AMIS (Agricultural Market Information System) run by the United Nations, will have a role to play. Let us hope that MED-Amin and its dynamic network can also play this role at the level of the Mediterranean region, which is such a priority.
In this context, in addition to the 9th annual meeting of the network (22-23 November), several important events will take place this autumn.  On the afternoon of 16 September, CIHEAM and the Centre for Mediterranean Integration (CIM) are organising a round table on the theme "Mediterranean Integration: the challenges of enhanced cooperation for the promotion of sustainable and resilient food systems". To celebrate CIHEAM's 60th anniversary, the CIHEAM Bari Institute is organising the third global conference on the revitalisation of the Mediterranean diet. Entitled "Changing course towards more sustainable and resilient food systems in Mediterranean countries: the Mediterranean diet as a strategic resource to accelerate the 2030 Agenda in the region" the conference will take place from 28 to 30 September 2022, in Bari (Italy). 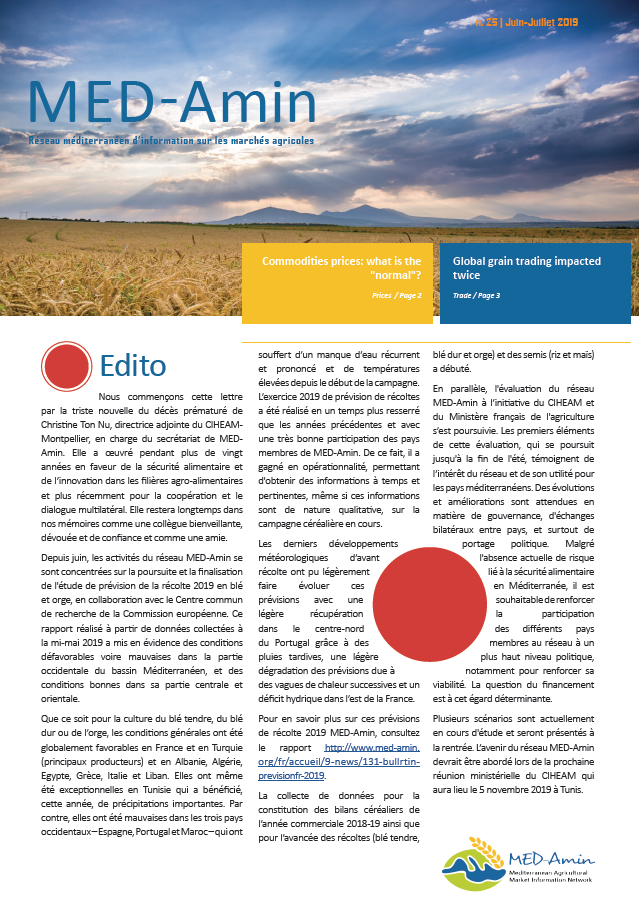